The Murals at Big Creek Winery 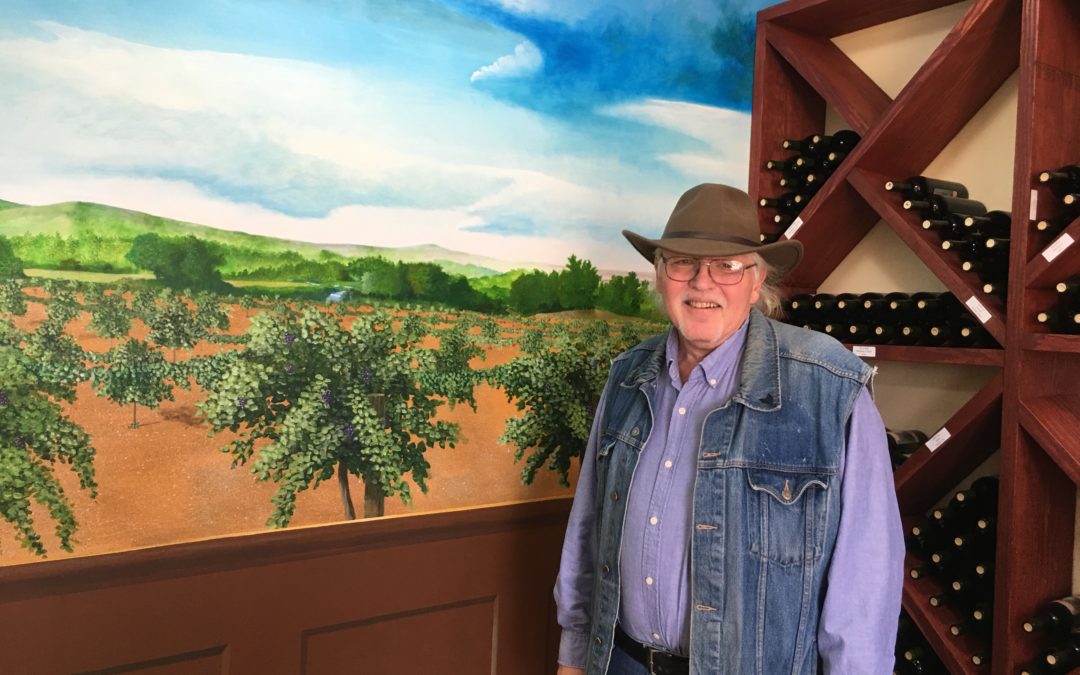 Fortune smiled upon me in 1966 when I had the unparalleled opportunity to work as an artistic assistant to John de Rosen, a world famous artist, in a project to paint a mural behind the main alter of St. Basils in Vallejo, California. He had painted the wonderful murals for Grace Cathedral in San Francisco and the majestic dome in the St. Louis Cathedral. From him I learned a great deal about the art of mural painting and have completed several projects of my own in the succeeding years.

When Billy Brymer contacted me in the summer of 2016 he said I had been referred to him by Gio Venturi , a good friend of mine, exceptional artist in his own right. All Billy knew was that he wanted a mural in the main gallery of his soon to open winery. We set a date to meet and give me an idea of the space I would be working in.

I might mention at this point that a mural not only inhabits a space and those dimensions restrict the mural in various ways, but the mural must live within the environment the space provides. When I say it must live, a good mural is more than mere decoration, or at least in my opinion they should, and as such they create their own world, embracing everyone who enters and transports them beyond the here and now and into the world of their existence. With that in mind I always look at the intended space.

Naturally, I’m wanting to know the basics; how long, how high, how wide, but I also want to get a sense of the area, the lighting, the environment, and the wall itself. I recall the first thing John de Rosen had done to the wall in St. Basils was he had it scrubbed, removing the top outer surface of the wall so he could work directly into the texture of the wall itself.

Before starting a mural I like to “feel” the wall; see if it is flat, cracked, weak in spots, damp, or too dry. Da Vince did not do this with the Last Supper, and the result has been dismal ever since. But also I want to get a sense of the room.

In this instance I asked Billy what his intentions were for the room and he explained. During that explanation I learned that he intended to have a table or tables in the room. I asked him where he planned to have them and he showed me a location near the wall where the mural would be. I asked the height of them and he took me into another room and showed me the table. It was not the standard table, standing tall enough to require a bar stool to sit at it.

This presented a problem, as far as I was concerned. If I expended the mural to the floor, as was originally intended, the table would block part of it but worse it would interfere with the setting the mural would create in the room. I explained this to Billy and he agreed. I told him I thought I had a solution and before starting the mural I measured the table and translated those numbers to the wall.

Before our meeting I had painted a “sketch” of my initial concept. The approach was simple and straightforward. The mural was to be in a winery so the natural subject would be a vineyard and this is the basic idea I presented to him, but I explained that the finished product would not look exactly like the sketch. He trusted me and we agreed on the commission.

I began work shortly thereafter. First I asked Billy if he would wash and clean the wall. I intended to use water based paint and I needed a good base without oils or debris to block adherence to the wall. He had done this prior to my commencing the initial sketch.

The preliminary sketch was in pencil and was very brief. The only thing that was concrete was the line, which denoted the height of the table. Measuring a point slightly higher than the table I scribed a straight line from one end of the room to the other and masked it off. Above that line I laid down washes of colors that represented be basics of the objects that would finally exist in the spaces. This extended to the sky which was created by varying shades of blue washes slapped onto the wall in a haphazard application.

The reason the underlying washes were applied so indiscriminate a manner was I wanted the paint to suggest things to me and not restrict the paint into preconceived delineations. I have found if I allow the work to talk to me it says things I may not have considered otherwise, and it also grows to fit the room.

After I had completed this stage of the work I removed the masking and reversed it. What I had decided to do was create a space below that line fit with the table motif as well as tie the room together. I painted it flat reddish brown into this space and then used measured portions to represent the side slats to imitate wood paneling. The side slats were lightened tones of the original color and were easy to apply.

The finished result was so convincing that one of Billy’s workers came in one day and saw the work. When he met Billy in the warehouse he complimented him on installing such nice paneling in the entranceway. Billy laughed and said he had not installed any paneling, that it was a painting that I had done the previous Friday. The worker came back, ducked his head in and double checked just to make sure it was pant. The greatest compliment of all is when people confuse your painting with reality!

The vineyard was a buildup on basic light tan foundation flicked with darkening spatters of reddish brown to simulate earth tones and the grape vines were painted on that. The trick was to paint the vine rows in a sweeping configuration that would lead the eye from left to right and create a sense of distance. This effect was intensified by placing a wooden fence to the far left of the vineyard, which would echo the distancing effect.

As I worked I let the paint talk to me and it told me about hills in the distance, a farm house and little road, a pond, a creek with water fall, and even an old cemetery. Fields, hills, and tree lines emerged from the washes that tied into the overall landscape. The same was true of the sky. Varying shades of blue suggested clouds and as they developed a darkening here or there rendered them distance. There was no initial plan of how the clouds or landscape would look. It all grew day by day as the undertones talked to me about what they were or what they could be.

The end result is a mural that depicted a paneled wall over which you can see a vineyard stretching out into a lush landscape. It renders a tranquil environment to sit and sip a glass of wine as you enjoy the company around you.

I was fortunate to be able to paint the Big Creek Winery mural and hope it is enjoyed for many years to come.